Yesterday my great-aunt Betty died in a pretty bad car accident. She was coming home from the grocery store, driving through a rural area she's driven through a hundred times before, when for some reason she pulled in front of an oncoming car. The car t-boned her, and from the site photos it looks like her car ended upside down in the drainage ditch. She died a little later at the hospital. She was 87 years old and completely independent, even working a job at the local dollar store. My grandmother called to tell me about it yesterday evening and she was pretty upset. Betty was her only living sister and I can imagine she's feeling terrible about it. Betty was always a cautious driver, so ignoring a stop sign was highly unusual for her, especially one she was familiar with. We think she might have had a stroke and that's why she went through the intersection without stopping.

Betty was a hellraiser wild child, completely opposite of my grandmother. She was named after her grandmother and apparently looked very much like her. When she wore her hair in braids, she could very easily have passed for full Cherokee, which her namesake was. She was rail thin with wrinkley, dark tanned skin, and missing quite a few teeth, refusing to have the hangers on pulled because they were her teeth dammit, and no one was taking them from her. One of my earliest memories of her was when my grandmother, her sisters Betty and Grace, my mom, Betty's daughters and I were out at a restaurant and Betty ordered a cocktail. I'd never seen such a beautiful thing! It was bright yellow with a tiny umbrella and a maraschino cherry, which I thought was just magical. Aunt Betty held it in her hand gesticulating to add emphasis to whatever story she was telling. At some point, she let a curse word fly, whereupon she paused, looked me dead in the eye and said in a low voice, "Pardon my French!" I was simultaneously terrified and enthralled. One of her favorite sayings was "It's better to be pissed off than pissed on."

What's strange to me is that when I google Aunt Betty's name, I get news articles with comments by people who stupidly assume all kinds of things. "Why was an 87 year old woman driving?" "Where was her family?" "I'll bet she was texting!" It's so damn infuriating, especially since I deactivated my Facebook account and I can't respond to these holier than thou shitstains. I want to tell them all to mind their own fucking business and piss off, à la Aunt Betty. I don't care if they pardon my French or not.

I'm still around! Just been too busy and exhausted to write much. Hopefully I'll be able to update in a day or two. 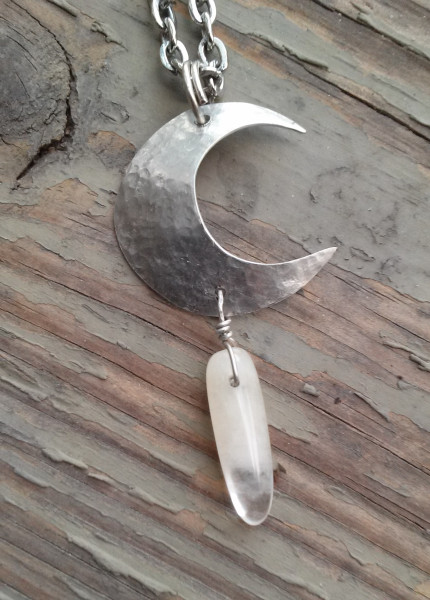 I went to the jewelry making class last Sunday and really loved it. I made a little cresent moon with an agate bead hanging from it and I think it turned out quite nicely. Cutting the sheet metal was tricky, but I finally got the hang of it. Pounding out the metal and smoothing it down with a file and sandpaper was really theraputic too. It looks nice hanging from a chain, nice enough that if I saw it in a shop for a reasonable price, I'd probably buy it. I'll have to take a photo when I get home. I also have some ideas for more jewelry so I'm going to have to look into possibly acquiring some tools. Thankfully, this isn't a very expensive hobby and there are a lot of tutorials online.

Whyyyyyyyyyyyyyyyyyyyyyy can't I make a living by putting together terrariums, embroidering my own designs, making jewelry out of metal and pretty crystals, and doing tarot card readings? I could get so much done if I didn't have to eat and pay rent.

Some people think Disney gives girls an unrealistic view of how they're supposed to fall in love. Me? My expectations of romance came from The Dot and the Line, a Romance in Lower Mathematics., I just knew that out there, somewhere was some guy willing to get into yoga and bend himself into spirograph designs just for me. 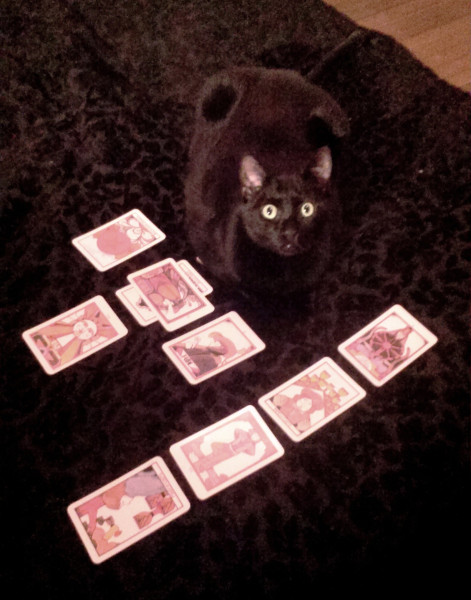 “You don’t need to see the card I’m sitting on. It’s the one that shows how you’re going to make an important journey in the near future and pick up an extra large bag of kitty cat treats.”

Suspend your skepticism for a few minutes and tell me all about your Fortean self.

1. If you could have any one psi ability, what would it be?
2. What is your favorite cryptid?
3. What dead person would you like to talk to for one hour via Ouija board?
4. What urban legend do you love?
5. What is the one conspiracy you believe is absolutely, unquestionably, categorically true?
6. If you were going to start a cult, what would your core doctrine be?
7. What is your favorite curse?
8. Tesla or Reich?
9. Crowley or Blavatsky?
10. Spontaneous generation or spontaneous combustion?
11. What message would you like to give your doppelgänger?
12. What is your preferred technique to rid your home of ghosts and/or demonic entities?
13. If UFOs exist, what would you like to hear the aliens say after they abduct you?

In my dream last night, L and I were at a convention being held in a gorgeous and vast 19th century mansion. After dinner, we were directed to a dance being held in one of the ballrooms. It was all very formal - L was wearing a black tux and I was in a long white gown. We stood in line to purchase tickets and when we got to the ticket counter, the person there said it was free and directed us through the ornately carved mahogany door. We walked into the ballroom, which was dark and dimly lit by overhead twinkling string lights. The ceilings were about twenty feet high, the left side of the room had been walled off and I wondered what was behind it. The other walls were a dusky blue, the stage where the band was playing was illuminated in a golden glow and all the other people were sitting quietly in chairs, watching the band instead of dancing. L and I stood behind them and I noticed my gown had changed from white to black. L smiled at me and put his arm around my waist.

I could still feel it when I woke up.

Is there an expiration date on the "punk ethos" excuse for not having your shit together? If there isn't, there should be.

Last Thursday I went to leave work and my car wouldn't start. Another of my greatest fears made manifest! I managed to call a tow truck and have it taken to my mechanic, then hopped on the bus from the Tech Center, transfered at Colfax, then walked the final two blocks home. Luckily I got to work from home on Friday, which was lovely, then Saturday morning I went via light rail to pick up the Scarlet Woman from being fixed. My mechanic said the wire from the starter to the engine looked like it had been cut, as there was a segment entirely missing, and that was the only wire damaged which ruled out a rodent chewing on it (apparently that's not uncommon). He said he didn't want to make me paranoid, but that it looked like it had been deliberately cut and to keep a look out while I was at work. It's so strange though... I don't really know anyone in my office building other than the people I work with so I have no idea why someone would mess with my car, but it was a little spooky walking around the parking lot at night. Maybe it's time to invest in another round of self-defense classes.

Tomorrow I fly out to Portland for the next few days. I will miss my guy and my kitty but I'll have a good time while I'm there, barring any plane crashes or the end of the world. True to form, I just gave myself a panic attack by checking the office's Friday return flight arrangements for the hundreth time. I noticed the dates were for the week after next, but I didn't notice it was last year's itenerary until my heart started racing and I got pre-black-out tunnel vision. Now I am the picture of perfect calmness. I think my self-destruct button blew itself up.